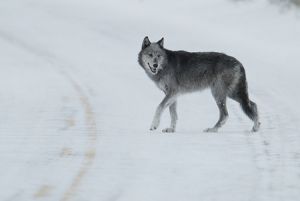 Deer have been a blight on suburbia for a while now, munching their way through tract-housing gardens and making some highways extremely dangerous for motorists, as their populations have exploded. (In DC, where they live in abundant numbers in the city's biggest park, Rock Creek Park, they're known by neighbors as rats with antlers.) Deer are also radically changing places like the forests of the Adirondacks by devouring young tree shoots from the storied maples and leaving nothing but beech. But a new study finds that it's not just deer populations that are wreaking havoc on North American ecosystems. It's all of the large mammals that graze on plants.

Moose, elk, and deer populations are at historic highs, according to an extensive review by scientists at Oregon State University. And they're taking their toll on young trees, reducing biodiversity of forests and contributing to climate change as a result. The leading cause of the disrupted ecosystems is the disappearance of the predators, namely wolves and bears. Researchers found that large mammal densities were six times higher in areas without wolves than in those with them.

"These issues do not just affect the United States and a few national parks," said William Ripple, an OSU professor of forestry and lead author of the study, in a statement. "The data from Canada, Alaska, the Yukon, Northern Europe and Asia are all showing similar results. There's consistent evidence that large predators help keep populations of large herbivores in check, with positive effects on ecosystem health.