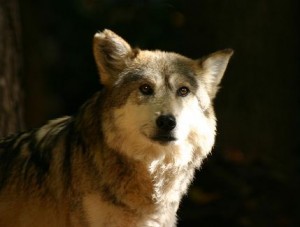 The text is simple and deadly: “Notwithstanding any other provision of law (including regulations), the inclusion of the gray wolf (Canis lupus) (including any gray wolf designated as “non-essential experimental”) on any list of endangered species or threatened species under section 4(c) of the Endangered Species Act of 1973 … shall have no force or effect.

If this bill passes, all gray wolves will lose their endangered species protections, including the fewer than 50 Mexican gray wolves that remain in the wild.? ?Please, if you haven’t written or called the White House yet, do it now. If you haven’t contacted your members of Congress, please do it now. And ask everyone you know to do the same.

According to a November 29 article in the Washington Post, Interior Secretary Ken Salazar made a back-room pledge to Western governors this week that the administration will back congressional efforts to strip gray wolves of their endangered species status. Salazar also issued a public statement that he supported delisting for gray wolves.

An article in Reuters on December 1 reported that Dan Strickland, Assistant Interior Secretary for Fish, Wildlife and Parks, said the Obama administration planned to propose lifting Endangered Species Act protection for wolves in Idaho, Montana, and Wyoming, and would seek congressional action if necessary.

The Endangered Species Act (ESA) requires that decisions on delisting be based on the best available science. Never before has a species been taken off the endangered species list by an act of Congress that would amend the ESA.

We can’t let this happen now. Obama needs to be held to his promise to preserve scientific integrity.

Supporters of wolves and other wildlife need to flood the White House and Congress with protests against this congressional end-run around the Endangered Species Act.

Please, call or write right away and tell everyone you know to do the same. None of our wildlife is safe if the Obama administration is willing to let political considerations trump science and law.